The ornate Wheelwright & Clark Building has graced the corner of Main and Hammond Streets since 1859 when clothiers Joseph Wheelwright and J.G. Clark erected the structure as the new home for their growing retail and wholesale business.

Wheelwright Clark & Company began in the 1830s when Joseph Wheelwright purchased his employer George Furber’s failing clothing business. Initially, the company was named for Joseph’s father, George Wheelwright who worked with his son. In 1840 it was the only clothing store in Bangor.

George died in 1845 and Joseph ran the business alone until 1850 when he brought on one of his clerks, J.G. Clark, as a partner. 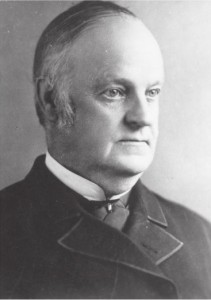 By 1859 the business had grown so successful that a new building was necessary to house the wholesale and retail divisions. That was when the owners contracted with Col. Benjamin S. Deane to design a new building.

Wheelwright & Clark housed their retail department on the building’s first floor using the other floors for wholesale sales and manufacturing. They also leased out portions of the building—a venture that put them in the center of scandal in 1861 when an angry mob accused newspaper publisher Marcellus Emery of being a Southern sympathizer.

Emery published his paper, The Democrat, from his fourth floor offices in the Wheelwright & Clark Building. Earlier that year, J.G. Clark, sensing that Emery was inviting trouble with some of his views, asked his tenant to remove his printing press and other property from the building. Emery refused and on August 12, 1861 an angry mob stormed the office and ransacked Emery’s office throwing pieces of the printing press out the windows and into West Market Square. Emery would publish The Democrat the next day, but from another printing house.

Wheelwright and Clark also found prosperity during the Civil War years. The company was awarded a contract to make 3,200 uniforms for the Union Army. To complete such an order,Joseph and J.G. subcontracted with the tailors in the city. What the tailors and Wheelwright’s employees couldn’t finish, the women of Bangor did, meeting at City Hall and sewing for many days in a row. 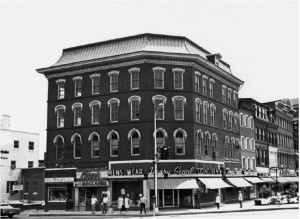 The building in later years

In 1878, Joseph and J.G. decided to focus solely on their wholesale business and moved Wheelwright & Clark to the Phenix Building next door. That year they reported more than $500,000 in sales and employed more than 200 people.

Two of their former retail employees took over the retail and custom departments, naming the company Robinson & Arey and continued to operate on three floors of the Wheelwright & Clark Building, employing 50 people.

The grand structure Joseph and J.G. built in 1859 survived both the Great Fire of 1911 and Urban Renewal and is mostly unchanged. Cast iron elements have been removed and just one of the five roof dormers remain, but the overall look and lines of the building remain true to Deane’s design as it looms over West Market Square today.