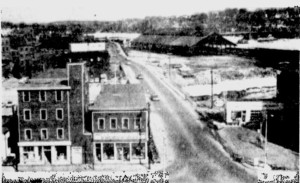 Junin’s store was located on this spot. Penobscot Plaza now sits on the land where the railroad building is in this photo.

In 1790, merchant Joseph Junin came to Bangor from Castine. He set up his business, primarily trading with Native Americans, along the shores of the Penobscot River near what is now the Penobscot Plaza (the former site of Union Station). At the time, it was common for one’s home and business to be located close to one another, if not in the same place. Junin was no exception.

Just 31 years old, Junin may have predicted the success of his business trading blankets, cloth and rum for furs from the Native Americans. What he couldn’t have guessed was that his legacy in the Queen City would be sealed the next year when he was murdered in his home, the first murder victim in the young settlements’ history.

On an exceptionally cold, snowy night, Junin’s nephew Louis Paronneau, who lived near Junin, burst into the home of neighbors Jacob and Elizabeth Dennett. Paronneau was upset and shared his concern for his Uncle’s safety because, according to him, the relationship between Junin and the Native Americans had taken a turn for the worse. He told the Dennetts that he had seen “angry Indians” lurking around his Uncle’s property that evening. He feared an unfortunate event was to come.

The Dennett’s attempted to calm Louis, assuring him that Junin’s relationship with the Native Americans was one of respect. Louis left the Dennett’s home.

That’s when there was gunfire.

When the neighbors went to Junin’s cabin to investigate, they found the merchant shot twice in the head and muskrat skins scattered around the property.

With no tracks left in the knee-deep snow or other signs of a struggle, neighbors began to suspect something was not as it seemed—that the Native Americans were not to blame for Junin’s death.

The lack of evidence against the Native Americans led to Louis Paronneau’s arrest and trial for the murder of his Uncle.

On February 22, 1791, he was found innocent due to circumstantial evidence—a verdict that outraged Bangor residents. After his release, Paronneau disappeared. Rumor has it that he went back to his native France where he lived very comfortably for the rest of his life—possibly using the money received from goods stolen during the robbery and murder of his Uncle. 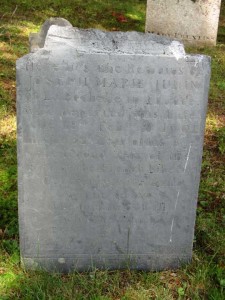 Joseph Junin was buried in the burying ground at Oak and Washington Streets. It, along with other graves on the site, was later moved to Mt. Hope Cemetery where Junin rests today.