On the corner of Hammond and High Streets, in front of the Hammond Street Congregational Church, is a historical marker dedicated to the man who published Bangor’s first newspaper, Peter Edes.

While his legacy as the first printer in Bangor, publisher of the Queen City’s first newspaper and one of Maine’s first publishers is important, his direct connection to the events that resulted in the formation of the nation are lesser known.

The son of one of the most prominent Sons of Liberty, Benjamin Edes, at the age of 16 Peter was dubbed a “Boston Bad Boy” by British General Thomas Gage because of his unabashed views and comments. 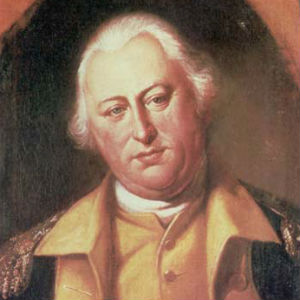 Benjamin Edes, also a printer, was a well-known Patriot in Boston. On December 16, 1773, a number of men including John Hancock and John Adams gathered at Edes’ Brattle Street home. They were served punch by an almost 17-year-old Peter from the Edes Family punch bowl before moving on to Benjamin’s Queen Street printing shop, disguising themselves as Indians and heading to Boston Harbor. 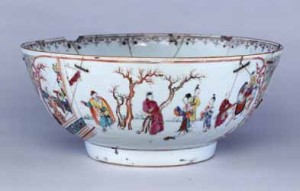 The Edes Family Punch Bowl. Image from the collections of the Massachusetts Historical Society.

Raised around such emphatic patriotism, it’s not surprising that young Peter shared many of his father’s views. During the Battle of Bunker (Breed’s) Hill, British soldiers overheard Peter’s “enthusiastic patriotic utterances” from his viewing point on Copp’s Hill. Two days later he was arrested, charged with possessing firearms and imprisoned for three and a half months. Peter kept a diary during his imprisonment that detailed the horrific mistreatment of prisoners. His diary is now part of the collection of the Massachusetts Historical Society.

Peter’s strong views, and unapologetic expression of them, would follow him throughout his life.

After his imprisonment, Peter apprenticed with his father before opening his own Boston printing shop in 1784. He closed that shop in 1786 and moved on to open shops in Newport, Rhode Island and Augusta, Maine before coming to Bangor in 1815.

When he decided to move to Bangor, he hired a team of six oxen to haul his printing press and equipment north. The 12 day journey cost $143—almost $2200 in today’s dollars. He opened his shop at 43 Main Street, now the site of Rebecca’s, and lived on Ohio Street.

The Bangor Daily Register printed its first edition on November 25, 1815. Edes charged a $2 annual subscription fee, but accepted payment in the form of “wheat, butter, cheese or rags”.

Sadly, after only two years he sold the paper. He wanted to expand the business to printing books and pamphlets and there simply wasn’t enough demand in the area.

It was a decision he personally regretted and in 1832, at age 76, Peter Edes returned to the Queen City. He would spend his last eight years living with one of his daughters and her family in a home next to the one he used to own. At the time of his death in 1840, Peter Edes was the oldest living printer in the United States. He is buried in Mt. Hope Cemetery.

Edes printing press and editorial chair from the Bangor Daily Register were donated to the Bangor Historical Society. Unfortunately, those were two of the items destroyed in the Great Fire of 1911 when the BHS lost its entire collection. 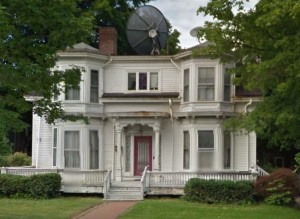 The location of the historical marker in front of the Hammond Street Congregational Church isn’t as misplaced as it may seem. The marker was placed there because it was within sight of Edes’ beloved Ohio Street home.