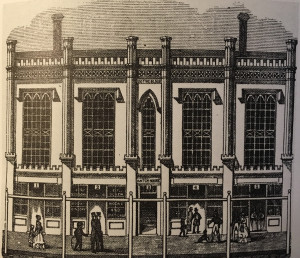 The Hatch House after its remodel circa 1855.

On Main Street at the corner of Cross Street and set back about 40 feet from the road, the Hatch House was a simple two-story wooden frame federal style building that was the family business, but also the place the Hatch family called home.

In its earliest days, the Hatch House wasn’t much more than a stagecoach stop. As Bangor grew, so did Isaac and Abigail’s business. Eventually the inn was one of the city’s most popular, housing overnight guests along with boarders who stayed for longer periods of time. Isaac and Abigail ran Hatch House together. Something that was made clear during the 72-hour British occupation of Bangor in September, 1814. 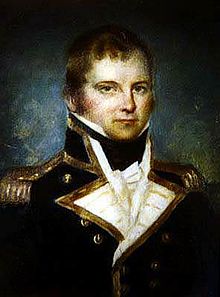 After British forces, under the command of Royal Navy Captain Robert Barrie, had successfully overtaken the Eastern Militia at the Battle of Hampden, the troops moved their three ships on to Bangor.

When they came ashore, Barrie demanded provisions and quarters for his men. He threatened to burn the town if residents didn’t comply. After Barrie banned liquor for his troops, they began looting and plundering the town. Six stores were damaged, resulting in nearly $6,000 in damages.

But this is where things got interesting for the Hatch House.

During the occupation, soldiers came into the tavern at the Hatch House and, using their swords, cleared the china and silver from every table sending it crashing to the floor. They left the tavern in shambles.

Abigail wouldn’t stand for it.

She totaled up the damages and sent a bill to Captain Barrie. He ordered his quartermaster to pay and reportedly, recouped the monies from his soldiers’ wages.

By the time the occupation ended, Bangor was left with more than $45,000 in damages and 191 Bangor men who were “paroled” after being considered prisoners of war. The parole agreement was part of a deal made between Barrie and Bangor Selectmen. The parolees agreed to “not take up arms against Great Britain or her allies during the continuance of the present hostilities, unless regularly exchanged…”

After things returned to normal, so did operations at the Hatch House.

Tho roof line of the Hatch House is seen at the base of the third line from the left.

Isaac expanded his business interests, dealing in lumber and in 1815, opening a store at the foot of Water Street where he imported and sold dry goods.

Unfortunately, those interests didn’t last long. Isaac Hatch died in August, 1816 at the age of 51.

After Isaac’s death, Abigail and one of their sons, Thomas F. Hatch would continue to run the inn, seeing it through disasters, changing times and an ever-expanding city.

In 1837, five wooden structures adjoining the Hatch House would be destroyed by fire, but the inn would survive. 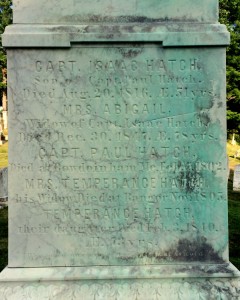 Around 1855, the Hatch House was moved closer to the street and the façade remodeled in the then popular Gothic Style by architect Benjamin Deane.

The remodeled structure was destroyed by fire in 1874.

Isaac, Abigail and many of their children and grandchildren are buried in Mt. Hope Cemetery.