Perched on the b 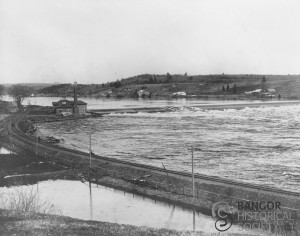 anks of the Penobscot River, just outside of Bangor’s downtown, sits the remaining buildings of the Bangor Water Works, that was once called an “engineering marvel”.

Located on the site of Major Robert Treat’s 1773 tavern in an area known as “Treat’s Falls” the Water Works provided domestic and industrial water and increased fire protection for the growing city.

Prior to the Water Works Bangor residents got their water from wells or collected rain water in cisterns. The city’s poorest residents, who couldn’t afford wells or cisterns, found other alternatives but did not have “an abundant supply of one of the greatest blessings”, something residents found unacceptable.

Citizens were also demanding that something be done about the “effluvia” (unpleasant and harmful smell or secretions) coming from the Kenduskeag Stream at low tide. The smell was due to the sewer system that had been established just after the end of the Civil War. It moved waste into the Stream and then to the Penobscot River. When the tide was low, leaving the Stream with little or no water in some places, the odor became unbearable.
A February 1875 Act by the Maine Legislature changed everything. It authorized use of water from the Penobscot River and established Bangor’s first Water Board with George Stetson, Graham Boynton and the Water Works future Supervising Engineer, Luther Eaton serving as its members. They were tasked with planning, designing and implementing a system that would bring water throughout the city for an estimated $5 per household per year. The creation of the Water Works came from this board.

In 1875 the city’s 20 street lights were gas powered. With the creation of the Water Works, city leaders saw the opportunity for the river to eventually provide electricity for those lights as well as buildings.

By the start of 1876 the Water Works was functioning with 17 miles of pipe. 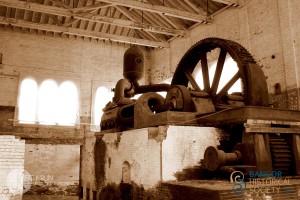 At its start, the Water Works Engineer and his Assistant both lived in an apartment over the Wheelhouse’s machinery room. In 1892 the living conditions were deemed uninhabitable due to the noise, damp and cold. Wilfred Mansur—who is responsible for the design of countless Bangor buildings and homes—created the gambrel style home that still stands on the property today.

It was the 1897 addition of the new Head Gate House/Wheelhouse that attracted the attention of engineers who lauded the project as an “engineering marvel” for the 30,000 tons of rock placed at the river’s edge and the 2.5 million feet of lumber used to build coffer dams to hold back the water while the masonry was laid.

Inside the new pump house sat the “Big Pump”—a Deane manufactured behemoth that was the largest power pump in New England. It was taken out of service in 1959.

In the late 1800s the city began experiencing outbreaks of typhoid. In 1904, after 504 cases were reported in Bangor, a filter plant was added to the Water Works complex.

Even in its earliest da

ys, the Water Works was an economic driver for the city. Once it was up and running, the service provided by the Water Works led to the reorganization of the Fire Department and resulted in the formation of two new hose companies—one on Hammond Street, the Holly Hose Company, where, until recently, Cakes By Jan was located and another on State Street, the Elijah Low Company, named for the system’s Chief Engineer.

The Bangor Water Works complex was in operation until 1970s.

After sitting vacant for many years, and after various plans and rumors about its future, restoration came in the early 2000s when some of the buildings, including the Pump House, were converted into apartments.

The “Big Pump” remains in its original home today.