Forever changing the face of Downtown……

Bart and I had to take a double when we were riding through downtown the other day. When I say double I don’t mean just a second look but I needed a second drive around too. I just couldn’t believe the artistic ideas that blossomed  from my dear friends…..I mean who would have thought to create the excitement and beauty from the somewhat otherwise dull construction site. While resurrecting this space at 11 Central Street, my genius friends; Mark Sampson, Ann Marie Orr and Brett Settle created a great buzzzzz around town. 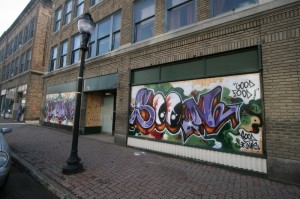 Everyone was talking about it. Did it happen on purpose or was it a tagg that was done under the cover of darkness? Well it was obvious on the second take that it was created  by an artist none other than Isaac Wright. It is colorful….and wild….. and it has begun its own movement in downtown soon to be a Bangorism of its own.