24 Somerset Street….once a diamond in the rough, now a pearl in the Queen’s crown. 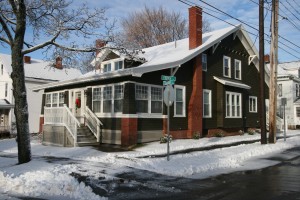 Built in the “California Craftsman” style, this Bangor “pearl” sits on the corner of French and Somerset Street. You may not recognize it, because it has been completely transformed. Although the luster had diminished, the bones were still there. The term “Craftsman” describes the workmanship detail that went into this home. 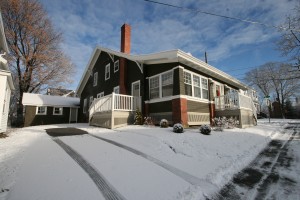 On the market for years when finally, Jane Boudreau saw the potential. It wasn’t easy!  It had been used as a doctors office with an apartment on the second floor. The center staircase had been removed, the porch had been winterized, and made into a waiting area. The upstairs apartment was dilapidated and it was an abandoned mess. Because of the city’s re-zoning,  eliminating the possibility of a two family, it had to be purchased by someone who wanted a single family home. 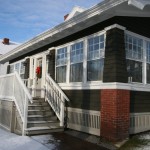 On May 16, 2011 Jane bought it, and the work began with Bob Kelly and House Revivers. The brickwork was re-pointed, the windows were replaced and the shingles restored. They also restored the  front porch and staircase. When it was ready for paint, the colors were carefully selected to display the exterior detail. The once eyesore has become a center piece.  Another example of Bangor’s  architectural beauty, a true Bangorism.